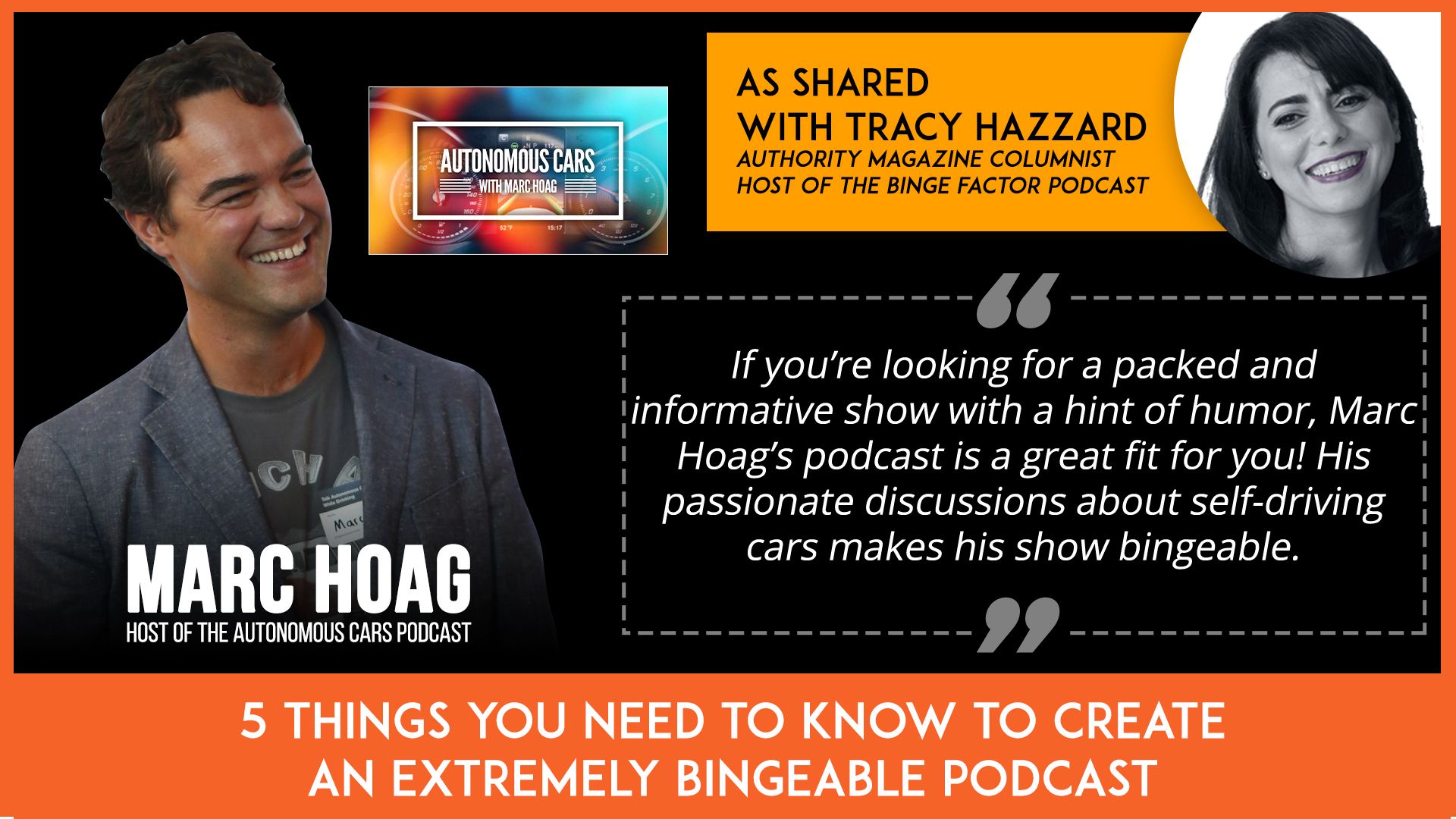 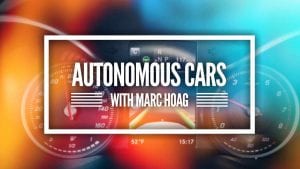 As part of my series of interviews about “How to Become the Center of Influence Through Podcasting”, I had the pleasure of interviewing Marc Hoag, a California-licensed attorney-turned-2x-startup founder based near San Francisco. Beginning his undergraduate studies at UCLA as an astrophysics major, he pursued a largely engineering-track coursework that spanned math and physics, along with a heavy pre-med selection of chemistry and biology courses. He eventually graduated — after five-and-a-half years of study, and near the maximum allowable units — and instead went straight to law school.

Almost immediately after passing the bar, Marc founded and raised a Series A for his first startup, Venturocket, a jobs/talent matching site. Venturocket eventually pivoted into Twibble, a scheduling, automation, and analytics tool for Twitter.

In February 2018, he launched his podcast “Autonomous Cars with Marc Hoag,” and has since grown it to the number one organic result on Google for related searches. Marc calls the burgeoning autonomous vehicle space “The greatest step change in humanity since the Industrial Revolution.”

It’s totally random and utterly unexpected, honestly. And the funny thing is, I still don’t consider myself “a podcaster.” I just sort of stumbled into this as a side project, as a natural consequence of my career shift into autonomous vehicles generally. It’s a weird story:

I’ve been a petrol head my whole life, in the most holistic sense of the word: I love the art and design of cars; I love the challenge and skill of performance driving; and I love the science and engineering of cars.

I almost certainly got this from my dad who used to race Lotus Super 7’s competitively. I’ve also done several track days at California’s Thunderhill and Buttonwillow Raceways, and can’t wait to one day tackle Laguna Seca’s infamous “corkscrew.”

I’ve written voluminously about cars (especially on Quora, where I’m a 3x Top Writer, and on Medium), and several years ago, I also started my own AV-focused WordPress blog called Innovately that I maintained for a couple years.

Around the end of 2017 I started noticing a curious lack AV-focused podcasts. I mean, yes, there were podcasts that touched on AVs generally; but a singularly focused podcast only on AVs, and one that was produced weekly? Let alone twice-weekly? It simply didn’t exist.

This got me thinking that it would be fun to experiment with a new medium besides writing, especially since everybody had always said I had such a great “radio voice,” whatever that means. So, I did what I had previously done with my two startups:

I decided to start my own podcast, of course.

So on February 27, 2018, despite having never even listened to a podcast before, I successfully published the first episode of my imaginatively named “Autonomous Cars with Marc Hoag,” and now, one year later, it’s the first organic result on Google for autonomous cars podcasts. It’s also the only twice-weekly podcast on AVs in the world, with the 100th episode airing April 23, 2019.

Each roughly 20-minute episode typically consists of three distinct segments in which I discuss — without simply regurgitating — interesting news in the world of AVs; but I also feature frequent guests from around the world that include academics, CEOs, venture capitalists, executives, founders, and even one Virgin Galactic astronaut.

In fact, the sheer number and quality of fascinating, brilliant people from around the world I’ve had the chance to meet is by far and away the greatest perk of doing this podcast. Seriously, I’ve never met with — or even connected with on LinkedIn — so many brilliant people in such a short period of time.

The funny thing is, I never wanted to be a podcaster. In fact, I still don’t. I’m not doing a podcast because I want to be a podcaster. What I really want to do, and why I started this podcast, is to leverage the podcast to validate my expertise in the AV space so I can pivot into an AV career, most likely in the consulting space, or perhaps as I’ve done the last eight years, as a PM at an AV company. I’ve even considered starting my own AV consulting firm, or relocating to DC so I can apply my legal background to the strange new world of law and policy in an autonomous future.

That’s my dream; that’s why I’m doing this podcast. I would literally relocate to nearly anywhere in the world for such opportunities. This is my true calling, my true passion. I love everything about this space, not least of which, the breadth of disciplines it spans, from law and policy, to tech and engineering, and everything in between, even a healthy dose of philosophy (cf. “trolly paradox”).

So that’s my weird, pretzel-shaped foray into podcasting.

The recognition. I’m still weirded out when I’ve spoken at various events and people walk up to me and say that they know me through my podcast. One of the most startling things to happen, however, must have been a phone call I received from an executive at the NHTSA in response to a LinkedIn invite I’d sent him a while back; that he actually took the time to call me to chat about all things AV — and the gap between technology on one hand, and law and policy on the other — absolutely blew my mind.

Hmm. As boring as it sounds, things have actually gone quite smoothly; I can’t really think of a truly funny mistake. I can say that it did take quite a few episodes before I really found my stride. For example, I was very open and transparent in the pilot episode when I said that I had no idea what format the show should take; so my first idea was simply to read, verbatim, one of my favorite essays I had written several years prior, “This is the end game for autonomous cars.” While it became clear almost immediately that this was not the best format for the show, and I soon discovered the three-segment / 20-minute format to be optimal, I do maintain it was probably the most appropriate way to launch my podcast, and to wit, it’s the most popular episode by number of listens.

Simple: as with any other creative thing, you can’t just decide you’re going to do it; you can’t merely “want” to do it. You need to be compelled to do it, with an inner drive, the same way you become hungry; it’s not a conscious choice you make, you either are, or you aren’t, hungry. You need to have a message you want to convey, and because — let’s face it — because you know there’s an audience for your show. It doesn’t have to be a huge audience — to wit, the AV space is pretty niche, and this show will never get the listenership of, say, Joe Rogan’s show! — but it does have to be a focused, interested audience. And of course, you need passion; dedication — doing two episodes a week, never mind they’re “only” 20 minutes long, is harder than it seems — and, oh yeah, a good mic. Seriously. Don’t even think about it if you don’t have a good mic. Fortunately, iPhone mics are apparently good enough.

From your vantage point what are some of the reasons why a person should consider creating a podcast series?

First of all, and as I alluded to above: You need a passion; you need knowledge; you need something to share, and you need an audience that cares. And optimally, of course, it’s best if you’re one of the only podcasters about a particular topic. That said, do not do a podcast because you want to make a ton of money. The podcast itself — unless you end up with at least 100K monthly listeners, I guess — will not be a pot of gold; it’s the secondary effects — speaking engagements; a new job; etc. — that will enable you to reap the financial rewards, if any. 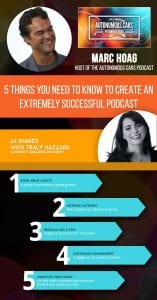 1) Book Great Guests. You won’t get great guests unless you have a great show. So first make a great show. Connect with relevant people on LinkedIn, Twitter, etc., and start casually asking if they’d like to do an episode with you. They’ll probably agree. Start small, work your way up. Before you know it, companies will start reaching out to you. Pro tip: register as media to any large conferences or events related to your space. This will get you on the mailing list and you’ll suddenly get more guest requests than you know what to do with.

2) Increase Listeners. Either you have a good show and it spreads by word of mouth, or it doesn’t. Social media is merely the mechanism, not the reason, by which your show will grow.

3) Produce In A Professional Way. Optimally, you want a professional — though not necessarily super expensive — microphone. I’ve been told the Yeti is the one to get, but I’m nearly 100 episodes into my podcast, and the audio quality from my iPhone XS MAX mic is absolutely fine. Finally, make sure you have a particular format, a tone, a thing that people look forward to. Organic, natural discussion is fine, but even that should have at least some structure to it. Hence my 20 minute / 3-segment format, for example.

4) Encourage Engagement. In my case, I make a point to engage people on all social media channels; email; web contact forms; etc. I then make it go full circle and do what I can to call them out in future podcast episodes, too. If people know they’ll be mentioned, they’re more likely to engage you because they see you as a real person, not just a random podcast personality.

5) Monetize Your Show. Let me say it again: Do not start a podcast because you think it will make you get rich. Unless you start getting 100s of thousands of listeners per month, you won’t. It’s the secondary effects — speaking engagements, new job offers, etc — that can lead to a lucrative turn of events.