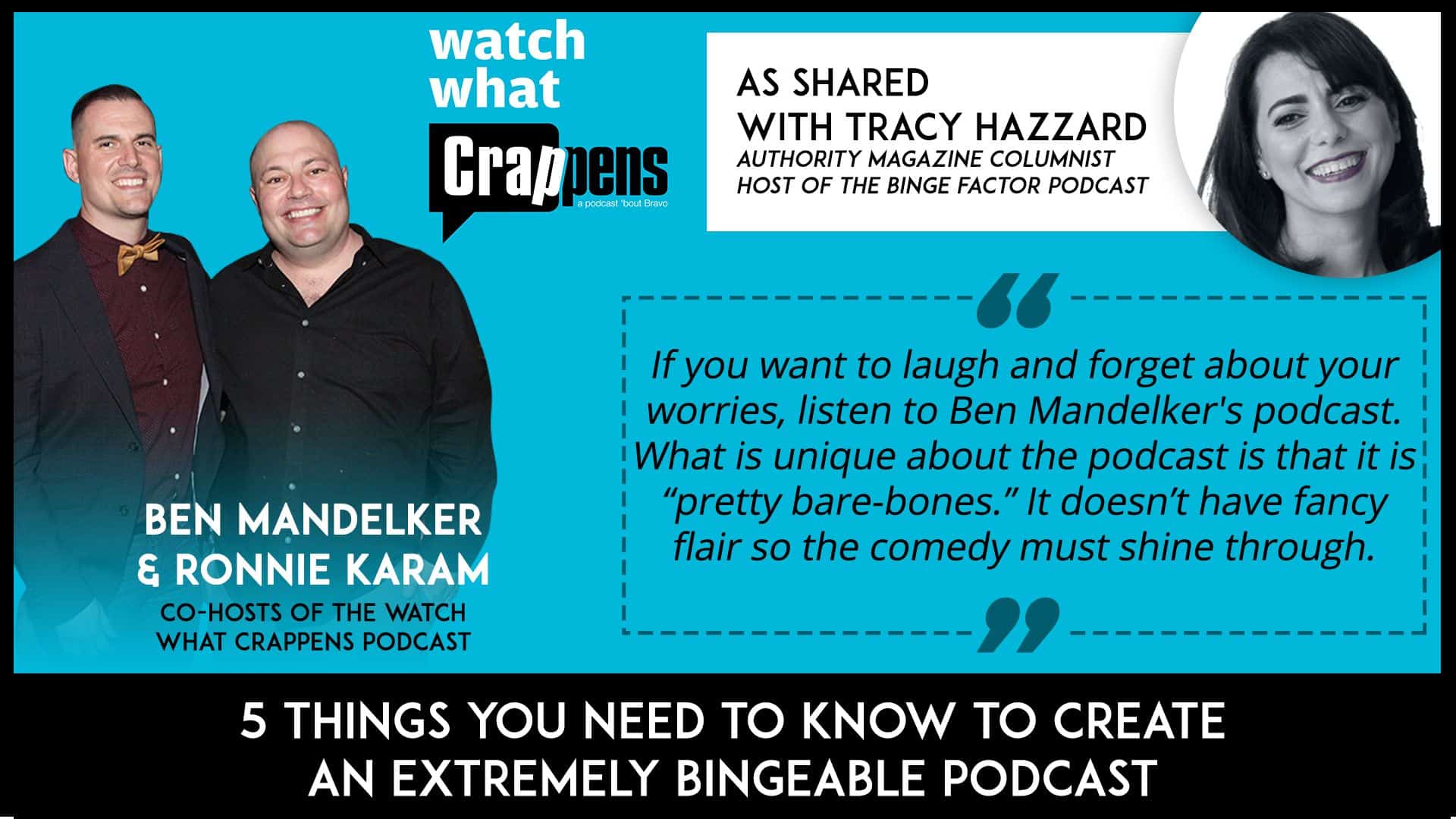 As part of my series of interviews about “How to Become the Center of Influence Through Podcasting”, I had the pleasure of interviewing Ben Mandelker is a co-host of Watch What Crappens, a comedy podcast that focuses on Bravo TV. Launching in 2012, Watch What Crappens airs five episodes a week and garners over 2.3 million listens per month. Mandelker and his co-host Ronnie Karam now tour North America, having brought their live show to various major cities and festivals such as SXSW and Just For Laughs.

I moved to LA to be a writer in 2001, and along the way, while earning my stripes as an assistant, a friend and I started a TV blog. It was the right place at the right time, and our site took off. In 2004, we wound up selling it to Bunim-Murray and taking on more writers, including Ronnie Karam. Fast forward in the early 2010s — long after I had left the blog: I was hired to host a web series called “Housewife Hoedown,” which was a weekly show that covered all the latest “Real Housewives” updates. One of my responsibilities was to find guests every week, and so I often asked Ronnie, who I knew was hilarious from the blog, and my friend Matt Whitfield, who had a razor sharp take on pretty much all aspects of life. The three of us had instant chemistry, and when “Housewife Hoedown” was cancelled, we decided to keep the party going. We launched “Watch What Crappens” in 2012 and broadened it to cover all Bravo TV, not just “The Real Housewives.” In the first year, work obligations pulled Matt away from the show, but Ronnie and I stayed with it, and now it’s our main gig.

The most interesting thing that has happened has been finding major success as a touring act. I mean, we record over Skype, which means the two of us spend most of our time sitting in our homes — often un-showered and not presentable to the outside world — talking crap about deluded reality stars, and somehow this has allowed us to take the stage at some of the most celebrated venues in the country. It’s been a totally surreal twist in our lives.

Well, the very first episode of “Watch What Crappens” was an absolutely fantastic recording — so funny, so on point, so sharp. We knew immediately that if people just heard this episode, they’d be hooked. But unfortunately, the audio file was corrupted and totally beyond recovery — so, no one ever got to hear the true first episode. We learned a very valuable lesson: ALWAYS HAVE A BACKUP RECORDING!

We’ve been recording for 7 years and are approaching our 1,000th episode. This does not include the nearly 250 bonus episodes we record exclusively for our Patreon supporters.

We just want to entertain our listeners for an hour (or sometimes 90 minutes). If we can make people laugh and forget about their stress, even for just a small amount of time, we’re happy with that. 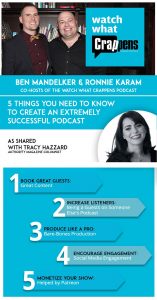 1) Book Great Guests.  The best ways to book great guests is to put out great content that they’d want to be associated with. Easier said than done. A better strategy is to build your network of contacts. Whether that means engaging on social media, attending functions, or simply asking someone for a drink, you never know who might open a door for you or connect you to your next great guest. Do not harass podcasters though and demand they come on your show. It builds resentment, and they’ll be less likely to retweet or share your content.

2) Increase Listeners. Having guests is a fantastic way to increase listeners, but perhaps an even better method is being a guest on someone else’s podcast. Our show saw big bumps after we appeared on podcasts such as “For Crying Out Loud” and “The Bitch Bible” — not to mention “Reality Checked” and “The Michelle Collins Show” on SiriusXM. Guesting on someone else’s show allows their audience to easily decide whether or not they like your voice and if it’s worth it to sample your podcast. However, once you attract new listeners, you have to have content for them. This means consistently releasing new episodes — whether that’s once a day, week, month, or any other schedule that you can realistically keep. The more the better. Our show decided in 2017 to become a daily podcast, which meant churning out content five days a week. It can be a bear sometimes, but our stats have skyrocketed as listeners have made us part of their daily routine.

3) Produce In A Professional Way. Our podcast is unique in that our production is pretty bare-bones. We record over skype with fairly basic equipment and do little to no post-production (generally speaking, we merely attach some music to the episode and create an ad break). We get away with it because we’ve always been an “outsider” podcast — we’ve never had slick production or been part of a powerful podcast network such as Earwolf or Wondery. In a weird way, our non-professional sound keeps us accessible, and having that connection with the audience is extremely important. If we started our show now, though, I don’t think we could pull that off. New podcasts should try to sound as clear and clean as possible because you never want to give the audience a reason to not listen. At some point, we’ll start taking our own advice and upgrade our production too I suppose.

4) Encourage Engagement. Engagement really comes down to social media. We have a Twitter, Instagram, and Facebook presence, with each serving its own purpose. A private Facebook group is an excellent way to create a community around your podcast; although, be warned that the larger the group, the more time you’ll need to spend moderating it. I personally love Instagram for the Stories feature as it allows for linking to ticketing sites, podcast episodes, and whatever else you’re looking to drive your audience to. Plus, IG Stories allow us to be creative and fun, offering up ancillary content to our podcast.

5) Monetize Your Show. Monetizing a podcast can be difficult, especially since there’s so much competition to get into an ad network. People shouldn’t expect that just because they have a podcast that ad dollars will automatically begin rolling in. Luckily, there’s Patreon. The site allows content creators to raise revenue from their audiences via donation subscriptions. It’s truly a game changer. We struggled to make any money on our podcast the first 4 years. I was driving Uber, my co-host Ronnie was working part time as a “cater-waiter.” After about a year on Patreon, we were able to become full-time podcasters. It’s that impactful.