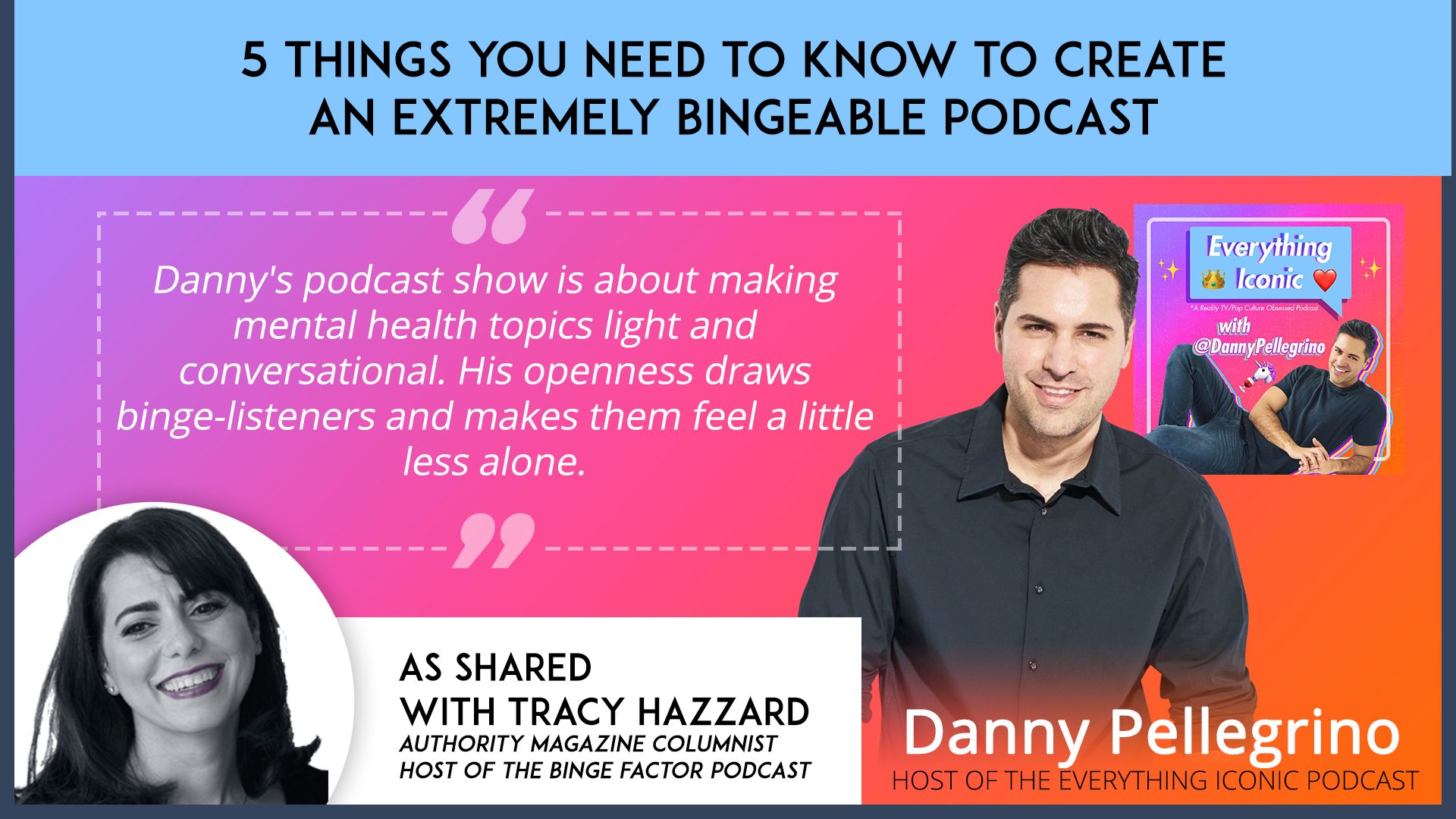 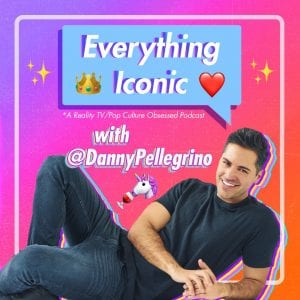 As part of my series of interviews about “How to Become the Center of Influence Through Podcasting”, I had the pleasure of interviewing Danny Pellegrino.

Thank you for having me! I spent my early twenties doing standup and sketch comedy around Chicago and Los Angeles for tens of people. Some personal and career setbacks made it hard for me to keep getting on stage at night. Instead, I focused on my mental health and began making memes on my Instagram to satisfy the creative itch. My memes were typically made using reality TV clips, or popular female-led movies and TV shows, Instagram was my creative outlet. As it grew, I realized I had an audience who might follow me into the podcast world. Podcasting also seemed like a great fit because I could perform without having to go out to a club at night and face the crowds.

I’ve gotten to interview so many of my childhood idols on the show. Bonnie Hunt was someone I idolized for so many years, and she came over and was so open about her life and career. Jennifer Love Hewitt was also recently on my show. I grew up with an “I Know What You Did Last Summer” poster on my wall (in which she starred), and here she was in my living room chatting with me. I also had the pleasure to sit down with Beverly D’Angelo, who played Ellen Griswold in the “Vacation” movies, a childhood family-favorite. I spoke with her about working on those films and continuing to work in an industry that, unfortunately, doesn’t favor women of a certain age. I love pop culture, so talking to the people who helped create some of my favorite pop culture moments, has been a dream come true.

My biggest mistake early on was not having the right equipment. My sound isn’t perfect now, but it’s SO much better than it was at the beginning. I wish someone would’ve told me to invest in a Zoom. People will always find something to complain about (and they will let you know via social media), so don’t hand them something like bad sound on a platter for them to complain about.

I hope listeners laugh with me for an hour. During my reality TV recaps, I just want people to spend an hour giggling along with me. These shows we love are so ridiculous, but they provide escape for so many of us. I also try to incorporate honest and open discussions about mental health in each of my episodes. Any time I can talk about my own struggles, or if I can get my guests to open up, it’s a good thing. I think it makes us all feel a little less alone. 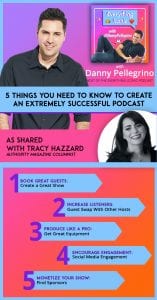 Podcaster Influencer, Danny Pellegrino of the Everything Iconic Podcast shares the best ways to:

1) Book Great Guests. Aside from networking, putting on a great show will help you get great guests. Listeners can be a fantastic network, and if the audience is into your show, they will want to come on the show and encourage others to come on via personal connections or social media. Some of my celebrity guests have come on because they enjoy the podcast, or they follow my social media, or because others on social media have urged them to. Oftentimes their inner-circles will help facilitate as well. I’ve had celebs agree to do the show because their nannies or assistants are fans of Everything Iconic. PR reps are also very important. If a PR rep believes in you or your show, they will want to book their clients as guests. No matter who you’re working with to book, be sure to always be kind so they want to work with you.

2) Increase Listeners. Guesting on other, similar, podcasts is the best way to increase listeners. A guest appearance on another successful show is a sure-fire way to get people to check out your show, at least once. When I started, established shows that cover similar content like Sexy Unique Podcast, Bitch Sesh, Reality Life, The Bitch Bible, and more, were kind enough to have me on as a guest. Each appearance resulted in growth for Everything Iconic. Getting on other shows isn’t always easy, but if you develop a good relationship with other podcast hosts/producers, you’re kind, and you prove yourself to be a decent guest, they will want to have you on. Think of the other podcasters in your market as your network, not your competition.

3) Produce in a Professional Way. Getting great equipment is important for producing the show professionally. It’s an investment, but worthwhile if you’re looking to do this long-term. Samson Technologies provided me with amazing mics and cables, and my handy Zoom H6 (which you can order on Amazon) makes it easy to record high-quality audio (plus it’s mobile). I edit my show using the GarageBand program on my Mac. I had never used it before, but it’s easy enough to learn. I incorporate clips and soundbites, which can be time-consuming to edit into the show, but it adds an extra something to the episodes that listeners seem to like. I suggest doing some test episodes before you launch and play around with your equipment and editing software. You will likely run into technical difficulties no matter what, but you can minimize those instances if you are comfortable with the tech side of things.

4) Encourage Engagement. Social media is so important for growing any business, particularly a podcast. I built a social media presence before starting my show, and it gave me a built-in audience when I launched. I found that the audience I had was engaging with me via DMs/tweets/comments. When I engaged back, I developed a relationship with the listeners. I learned what they like, what they don’t like. That helped my show get better. As the show gets better, more people will tell their friends, and more people will post on social media that they like your show. It snowballs. I have not spent a single dollar on paid advertising for my show, but because of social media, I have been able to grow and monetize. More importantly, I have a relationship with the listeners that is invaluable to me. Together, we’ve formed a community of like-minded people, and that is more important to me than money. They get my silly jokes, and we laugh at this stuff together.

5) Monetize. I went into podcasting assuming I wouldn’t be able to monetize for at least a year. That took the pressure off, and I focused on making the best show I could without worrying about paying my bills with podcast money. Ultimately, I found a few sponsors before that year mark, but it’s important to recognize it will take time.

However, even if your show has smaller download numbers, you can go to sites like Patreon to monetize. I wouldn’t have been able to keep doing my show without the support of my Patreon listeners. I offer just one bonus episode a month on my Patreon page. Listeners can pledge $4 or more per month to access that bonus episode, and I let them know their support is not only going to that bonus episode, but it’s helping me create the entire show. Your numbers may be small, but if your listeners are loyal, they will join your Patreon page at a cost. It’s an excellent revenue stream that will supplement your show while you grow. When the numbers are big enough, you can reach out to ad networks.

I sell t-shirts via Threadless with various quotes from my show. There are so many different ways to bring in revenue aside from in-episode commercials, but you have to give your listeners a way to show their support.