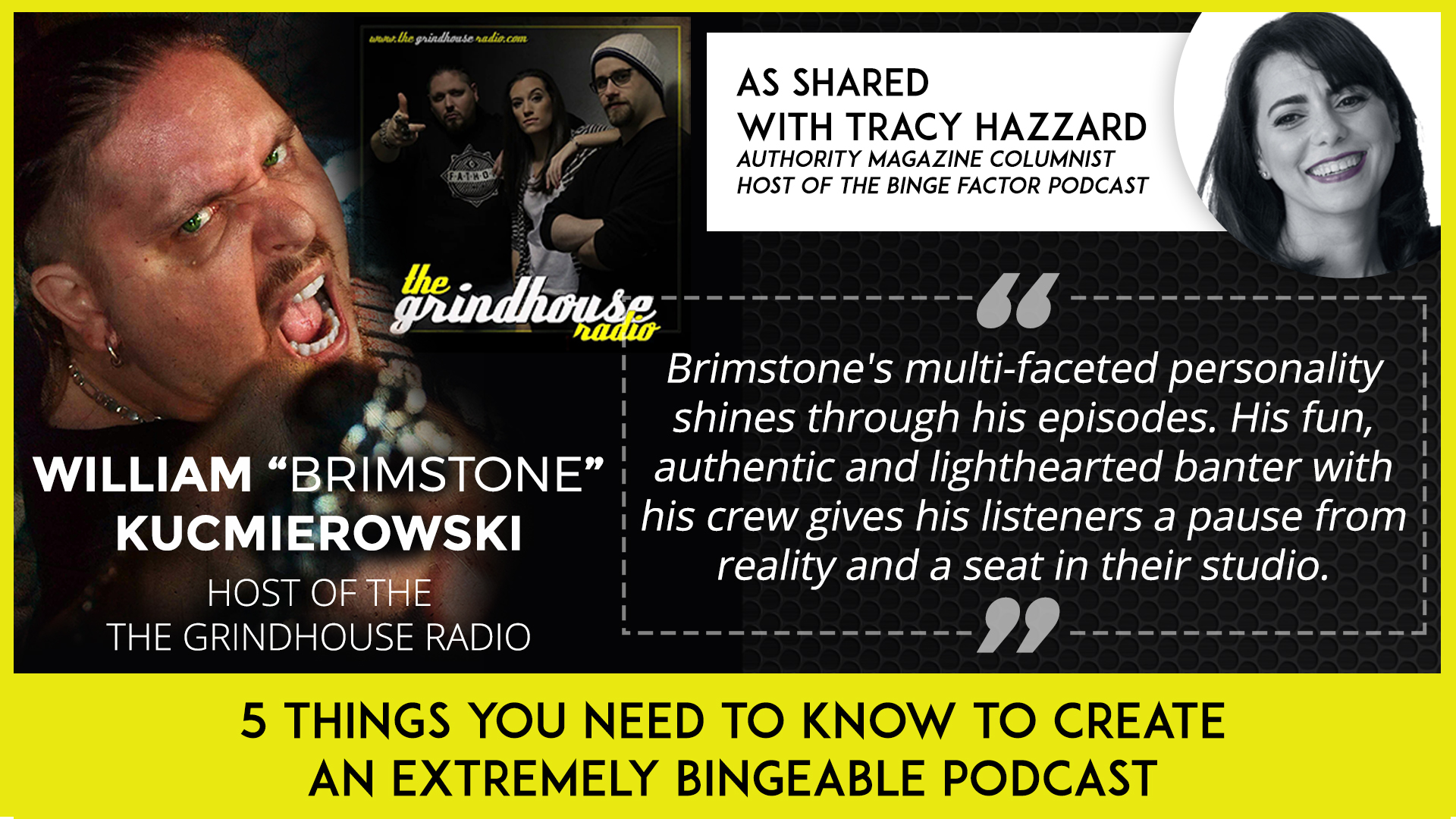 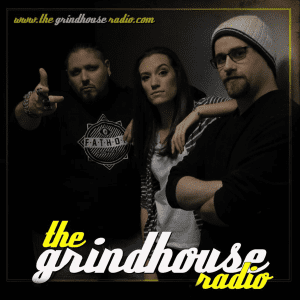 As part of my series of interviews about “How podcasters can become a center of influence,” I had the pleasure of interviewing Brimstone (William Kucmierowski). He has had a successful and rewarding career spanning well over three decades; participating in numerous entertainment fields boasting a list of titles including professional wrestler, radio host/professional podcaster, actor, voice actor, author, musician, philanthropist, food critic, horror model, and comic book/animated/children’s book/video game hero. He’s been called a Renaissance man by many, but more accurately described as a well-seasoned entertainer and serial entertainment entrepreneur.

The pleasure is all mine, thank you for having me! In terms of becoming a professional podcaster… it kind of happened by accident. I’ve been in entertainment for about four decades at this point and have worn many hats over the years. As an entertainer, I feel that it’s extremely important to diversify and consistently re-package yourself to stay relevant in today’s world. I’m a firm believer that you should create the things that you wished existed and express your creativity in whichever outlet or outlets that you deem interesting.

That being said, I am no stranger to all forms of media; however, I was always on the other side of the microphone, so to speak. I had attempted to utilize my name value to pitch doing my own talk show on a few of the big terrestrial radio networks that I had a longstanding history with, but regardless of the multiple contacts I’d made requesting a sit-down discussion of what I could bring to the table — all I heard was crickets.

I shortly after had an offer to do a show on an internet radio network that unfortunately had red flags all over it! I’m an ‘all-in’ kind of guy, so albeit I didn’t have an actual network behind me at the time — I purchased the URL and started working on a website. I just sidelined the idea temporarily until I wound up hiring a pair of interns for one of my other companies, Hound Comics, Inc. (Hound Entertainment Group). Not only did the three of us get along really well; but they both had direct experience in broadcasting. Steve ‘Zambo’ Zambito came from Five Towns College with knowledge and experience in Engineering, while Kim Adragna came from Farmingdale University where she ran the school’s radio station.

Again, our in-office banter was always fun and I decided to ask them both what they thought of potentially doing a show together. We all agreed to give it a shot — so after hours on the night of July 13th, 2015, we sat around a single mic on one of the desks of an empty office and The Grindhouse Radio was born! The hour we scheduled out went by SO quickly and although it sounds cheesy — it was magic. The vibe was indescribable, who would have thought that we would have clicked so perfectly! I reached out to a friend of mine who was running an internet radio station in Pennsylvania at the time, Toxic Radio — and that first episode of GHR aired on July 16th, 2015.

We quickly recruited multiple networks (who we affectionately call the Syndicate) from around the country to begin syndicating us on the Internet and terrestrial radio. I had been a guest on countless podcasts in the past, but Zambo and Kim continued to explain how podcasting was the wave of the future and it was the direction we absolutely needed to go — so on January 28th, 2016, we officially launched our new two-hour format on iHeartRadio, iTunes, Google, Spotify and a new line up of podcast heavy networks. That move literally changed the game for us.

Truthfully, the most interesting things that have happened since beginning our podcast are the milestone accomplishments. We were nominated and voted, Best Radio Station on Long Island 2017, 2018 and 2019 over all the terrestrial radio stations in the area — this was extremely humbling. Notably, The Grindhouse Radio was a topic of discussion at the European Planetary Science Congress 2018 — officially making us a citable source for scientific and collegiate papers, and we won the 2018 SCORE Small Business Awards and were awarded the Grand Championship. Also, my co-host and business partner Kim (Adragna) was inducted into the LI Business News, ’30 Under 30’ Class of 2019. Those are just a few cherries on the top of our business’ successes.

The biggest mistake I’ve made in the past with other projects and business’ have been working with and trusting the wrong people. It’s a shame that there are so many bad people out there and people cannot be trusted on their word and a handshake. My best advice and what I’ve learned is that before taking on any partners — proceed with caution, vet them and ensure that you have legal documents in place. It can be an expensive mistake in the long run, so do your due diligence and spend the time making sure the person you’re getting into bed with is right for you. It is also imperative that whomever you decide to work with has the same or at least similar work ethic, energy and drive that you do — otherwise you’ll find that you wind up doing the lion’s share of the work while others are living high on the hog!

As a host, I’ve essentially been podcasting since 2015 — The Grindhouse Radio to date has over 230 episodes. I’ve also been doing my own companion series to GHR called, Within Brim’s Skin — and I’m about 45 episodes deep thus far there.

Check out the full interview in Tracy Hazzard’s Authority Magazine article about Brimstone! 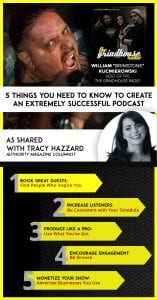 Podcaster Influencer, Brimstone of The Grindhouse Radio shares the best ways to:

1 ) Book Great Guests. Your guest booking depends on what kind of a show you are putting out into the ether. As we are predominantly a pop culture-based show, any public figure from any spectrum of entertainment is a potential candidate. Now, since I have been in the industry for about forty years — I have a wide range of well known and reputable friends that I can reach out to and secure for the guest segment. When I told friends about the show, everyone offered to do the guest thing when we were ready and every one of them did a drop (also known as a Station ID) for us… this included my friend, the late, great Stan Lee. It was an honor and a privilege for these people to attach their name to GHR on my word — very humbling.

My suggestion is that when seeking out guests for your show, whatever type of content that you are putting out there — find people who inspire you… that’s what creates the most intriguing and engaging conversations for your guest, yourself and the listeners.

2) Increase Listeners. Designate a specific day and time each week/month that listeners and/or viewers will always know when your new content will be released. Keep your long term listeners engaged with the fresh content. Shows that are erratic in scheduling normally don’t pick up much traction, nor do they exist too long as most creators get frustrated with the lack of response or growth (of course, there are exceptions to the rule).

Strategically pick when, where and how your content is released depending on the type of show you are putting out into the ether. You also want to be active in the community that you are broadcasting about, utilize social media to the fullest extent and most of all — be yourself! Authenticity sells.

3) Produce In A Professional Way. The thing here is — production is in the eye of the beholder and what they are looking to get out of it in terms of end goal. There are many different levels of podcasting — GHR is extreme in the fact that we have a polished and fully produced show with state of the art equipment and in-house engineers.

I’ve heard shows that are produced on Anchor using two cell phones that sound fantastic — so it really comes down to personal preference. Some people have basic set-ups in their home or office and put out their episodes ‘as is’ where others know a few tricks to clip in their intro and outro to clean it up a bit. So again, there are many different ways to skin a cat and it comes down to how that specific creator wants to be perceived.

4) Encourage Engagement. All you can really do is put your heart and soul into creating something, put it out into the world and hope that it attracts other people with the same mindset, goals, ambitions or interests. If you go into this or any other industry as a means to get rich, famous or trying to appease people in order to get followers — you’ve already lost.

So many creators do this and focus on what they ‘think’ people want to hear, rather than being themselves — losing their authenticity. Be consistent and sincere with your social media outreach and responses. If you stay consistent, authentic and positive — people will eventually catch on and respond. Remember that, “A watched pot never boils”, “If you build it they will come,” and most importantly, it’s not a race — it’s a marathon. Think of the long game and play it accordingly.

5) Best Way to Monetize. Monetizing boils down to the age-old question — How much ‘content time’ am I willing to give up for advertisers and sponsors? I am not a fan of the CPM’s (cost per thousand) and affiliate style of marketing and advertising — in my opinion, it is giving away free advertising and promotion for little or nothing in return. My listeners aren’t stupid and I absolutely refuse to treat them that way!

At, The Grindhouse Radio — we deal business to business or through agencies and work with the companies that we can personally get behind. Our clients know that we will go above and beyond for the brand itself, support not only on-air; but via social media and while touring and signing at events. I’ve become synonymous with the brands that I work with including Kikkoman, Mane ‘N Tail, and Boss Hoss Cycles to name a few. Seek out businesses that you can feel good attaching your name to — aim to your specific demographic and approach accordingly. Do some research and invest time into creating a professional media kit — you will only be taken as seriously as you put yourself out.

If you’re artistically challenged or don’t have a friend who can help you with design — visit Fiverr.com and you can hire a graphic designer for a minimal cost to help create your logo, cover art, promotional art, and media kit. Also very important, have thick skin — you’ll get no’s, but eventually you’ll get a yes.

Check out the full interview in Tracy Hazzard’s Authority Magazine article about Brimstone!