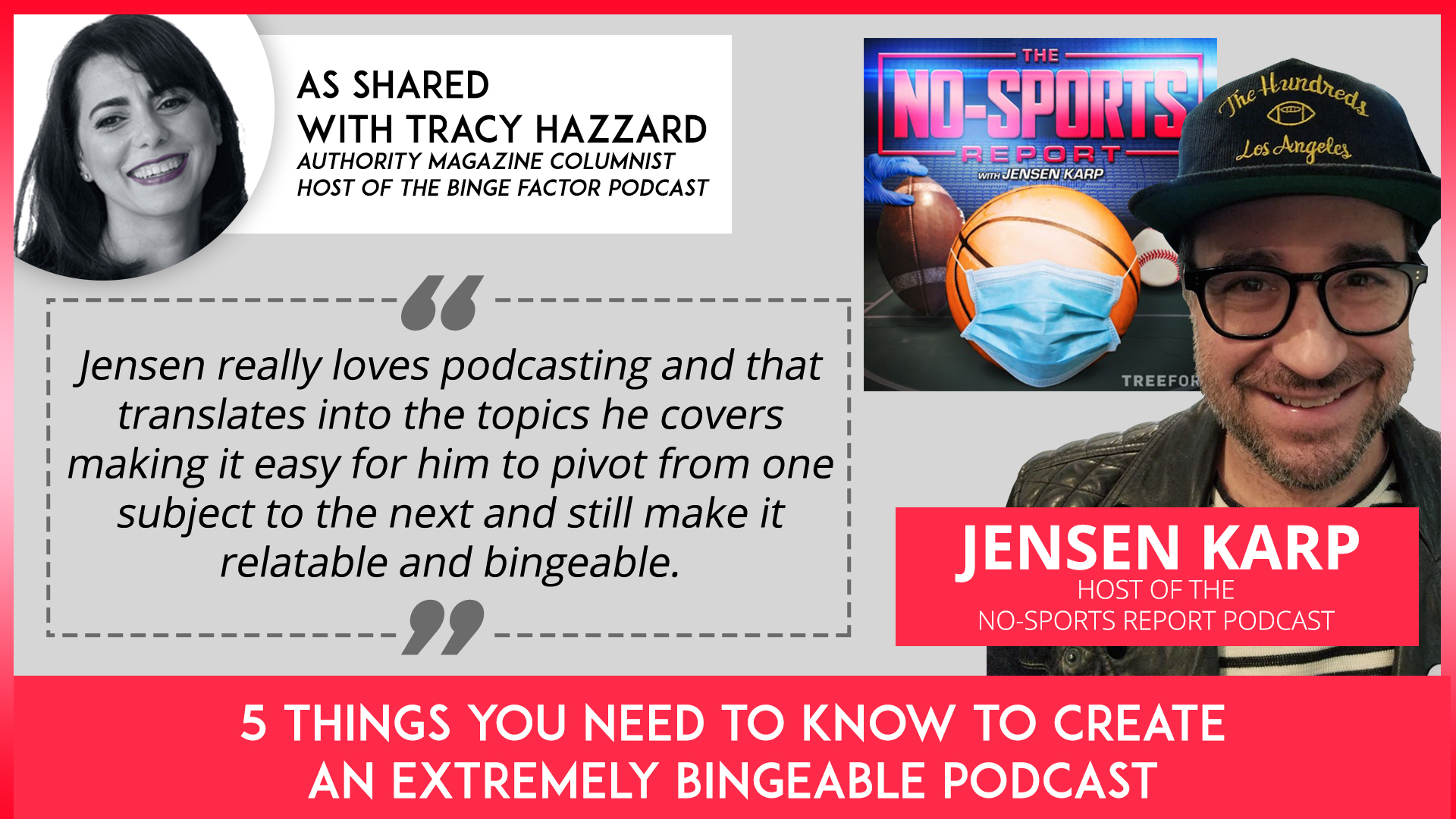 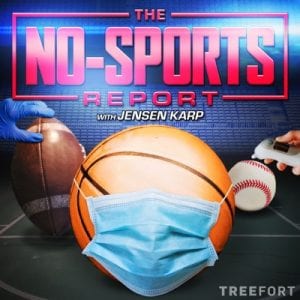 As part of my series of interviews about “5 things you need to know to create a bingeable podcast”, I had the pleasure of interviewing Jensen Karp. He is the host of the new No-Sports Report podcast from Treefort Media featuring ‘fireside’ chats with the best athletes, coaches, commentators and legends from the sports world who — just like their fans — are desperately missing the games they love right now.

Jensen is the multi-hyphenate to put other multi-hyphenates to shame. The writer, comedian, art dealer, producer, podcast host, father, husband, and former rapper has been making headlines since he found himself with a million-dollar record deal at age 19 under the moniker Hot Karl on Interscope Records.

His memoir, “Kanye West Owes Me $300,” was released in 2016 by Random House / Crown Publishing and he’s the Executive Producer (and writer), alongside James Corden, of the TBS hit series, Drop The Mic.

It’s quite a tale. As a kid, I was always super into hip-hop, and despite looking like your accountant, I was always a very good rapper. Specifically, a battle rapper. So I had entered a radio contest at 19-years-old while attending USC here in LA, and that magically resulted in a million-dollar recording contract with Interscope Records. I made songs with Kanye West, DJ Quik, Redman, and Fabolous — but things didn’t quite work for Hot Karl (that was my awful rap name). And since then I’ve been focused on comedy writing, whether it was for the Late Late Show with James Corden, Sacha Baron Cohen’s Who Is America?, the ESPYs or my own show Drop the Mic on TBS. And somewhere along the way, I got into podcasting with a show called Get Up On This, which I did at Earwolf for many years. And now — I’m thrilled to have this very odd career path leading me to The No-Sports Report during America’s strangest time.

Well, with my old show, Get Up On This, I focused on introducing up and coming things to the listener. Whether it was a musician, or an app or a TV show that hasn’t quite received the attention it deserves yet. And one time I stumbled on a young high schooler named Chance the Rapper. I featured him on the show, and it was the first time he was mentioned on a podcast. He and his manager emailed me so thankful and we not only met up when he was in LA, I ended up producing one of his music videos. And watching him go from this little gem to face of hip-hop was an incredible ride. I would later book him for the ESPYs and be the first person he hugged after winning the Best New Artist Grammy since I was writing on both — and it’s just been a cool friendship born out of the podcast.

When I first started doing the show, it would air live on Kevin Smith’s SModcast network. He was so ahead of the curve with podcasting. But doing live was so hard. I would later spend a year and a half on a morning show in LA on KROQ, and I didn’t love that process either. I would rather just record and be in better control of it. But I would have guests come in and all of it went out there in real-time. And we made SO MANY mistakes. And guests wouldn’t show — and I was still locked in to go on-air. I appreciated Kevin giving me that opportunity, but after a few weeks, I started pre-taping. I would strongly suggest no one do live podcasting, at least when you’re starting out.

Man. I started with a show called Hype Men, which was me and two other guys talking about hip-hop — and I think that was in 2010? Then Get Up On This, then the radio gig (which was also a podcast), and now the No-Sports Report. I also did an off-shoot show with my mom where she gave out (bad) love advice to listeners. I genuinely have zero idea how many episodes aired, but if I had to guess? 700? OOOOF. I have wasted my life.

What are the main takeaways, lessons, or messages that you want your listeners to walk away with after listening to your show?

With The No-Sports Report, I’m really proud of how we’ve been able to make it enjoyable for listeners who don’t follow sports. We focus on what these professional athletes are doing during quarantine, which is so interesting because for their entire lives they’ve focused on this one sport — and now it’s gone. Even when these subjects are athletic gods or goddesses, we still all relate on just a human level right now. We’re all facing the same problem. And this show takes one subsect of people and fills you in on their lives. It’s fascinating to me. We’ve already talked to a football player who was traded in the middle of the pandemic and is having trouble finding furniture for his new location — and another guy who decided to retire from Patriots just last week. The whole world is in flux, and the universe of sports is no different. 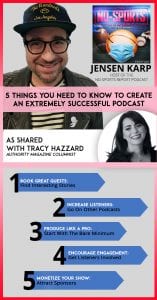 1) Book Great Guests. Don’t worry about HUGE names. Just find interesting stories. Find people who will “play along.” That’s what makes me so happy about The No-Sports Report. We don’t need Tom Brady to guest on the show. We need to find athletes who want to share their quarantine stories — and the stories really are the focus. But Tom Brady — you can come on if you want!

2) Increase Listeners. Going on other podcasts always helped me gain listeners. As well as being on two very popular networks with SModcast and Earwolf. But go appear on other shows. ANY of them. It always helps broaden your listenership.

3) Produce in a Professional Way. Don’t go buying the most expensive stuff in the world to make your podcast sound “nice.” Just get whatever makes people not want to pull out their hair when turning it on. Don’t worry about music beds and drops. Make a good show first, then worry about building out Dr. Dre’s studio in your house.

4) Encourage Engagement. Podcast listeners always want to be involved, and that’s the best part about podcasts. On Get Up On This, we encouraged listeners to send in their own theme songs. And we would get INCREDIBLE music. We ended up having a lot of our music being featured in its own article on Complex and Fast Company. Basically saying the best rap music of the year was being made exclusively for a podcast. That, to this day, has been my most rewarding moment in podcasting.

5) Monetize. I’ve truthfully never been in podcasting for the money — but it did lead to a radio gig, which did lead to money? I’m a bad example for this one. I think if you make good content and get the word out, hopefully sponsors come? WHO KNOWS?