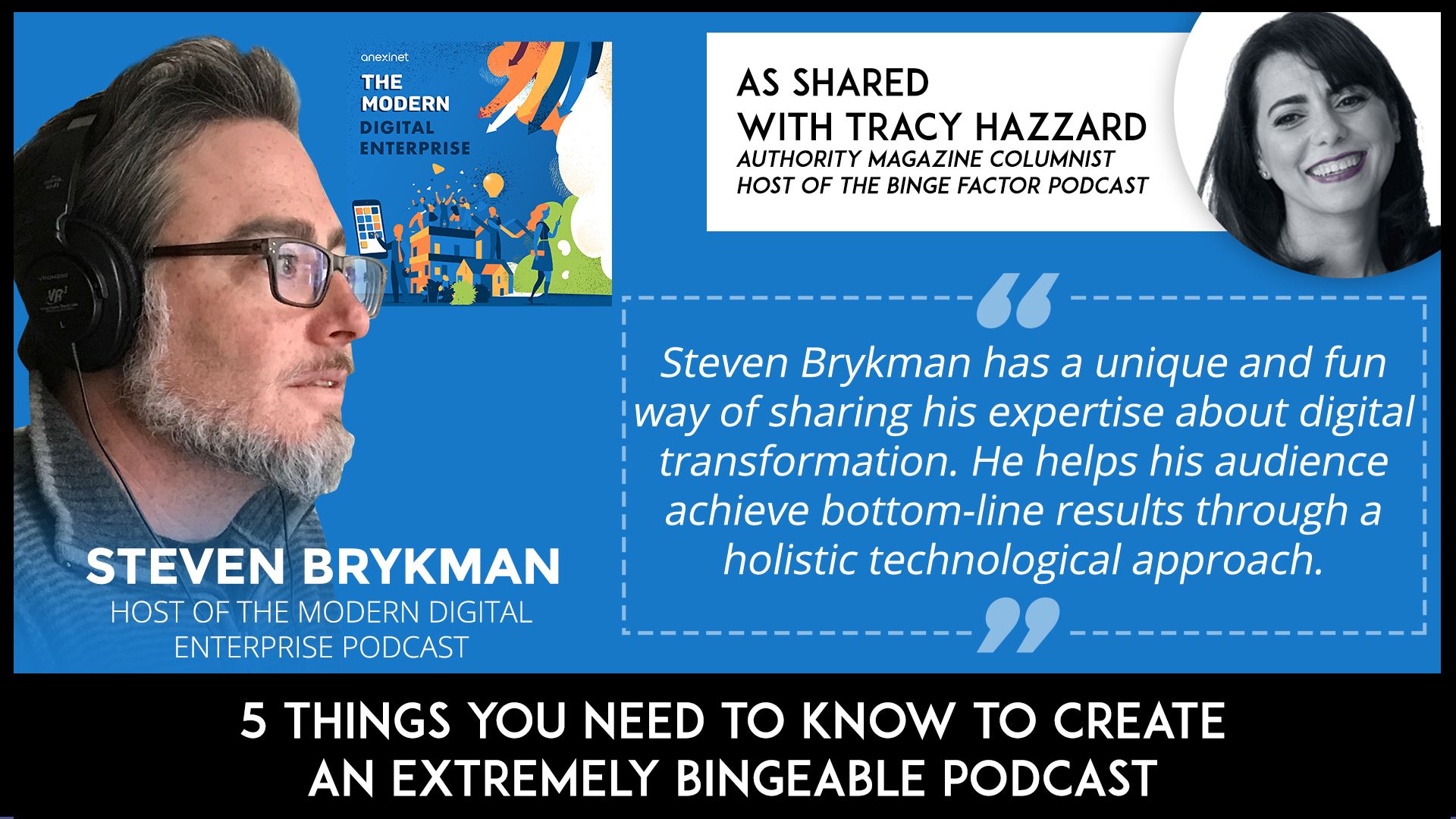 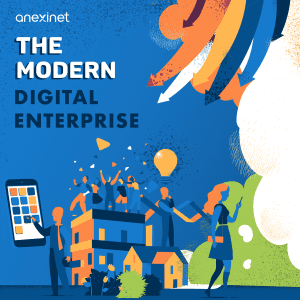 As part of my series of interviews about “5 things you need to know to create a “bingeable” podcast”, I had the pleasure of interviewing Steven Brykman.

Steven likes to think of himself as a semi-famous F+-list personality: a former Managing Editor of National Lampoon with many TV credits who was featured in Ars Technica, Tablet, and the New Yorker’s Talk of the Town. His responsibilities on his current gig as Lead Content Strategist with Anexinet include hosting, editing, and producing a technology podcast The Modern Digital Enterprise (formerly Device Squad). This podcast has been running monthly for five years, since February of 2016, and has featured countless guests. He has many stories to tell and an entertaining way to tell them!

It all started back in early 2016. I’d just been hired by a tiny enterprise mobile strategy startup called Propelics. I was the company’s third employee and though my title was Sr. Mobile Strategist, we all had to wear a lot of hats, so I was part mobile strategist, part UI/UX designer, part marketing lead. I was looking to increase awareness of Propelics by any means necessary, which included some unorthodox approaches, such as writing viral humor pieces about technology and UX design.

I read an article about how podcasts were about to take off, due to CarPlay enabling people to listen to podcasts while driving, and realized it would be a great option for Propelics. For a tech consultancy in its infancy, client-trust is the biggest hurdle to overcome. Success is dependent on whether or not you can convince people that they want to work with you — and what better way to show off our personalities, humor, and smarts than with a technology podcast? I used to do all the audio and video production for the National Lampoon back in the 90’s, so already knew what it would take, and how to get it all done. Four and a half years later, Propelics was bought by Anexinet, and the Device Squad podcast is now The Modern Digital Enterprise.

That would be my interview with Cathy Farmer, then Director of Mobile at BayHealth Development. I was on-site as a mobile strategist to help them develop their mobile and desktop applications. I had gotten into the habit of asking clients if they’d be willing to talk about their experience with us on our podcast. I knew she was from Boston, as am I.

At one point, she mentioned she used to be in a punk band — back in high school. I also had a punk band back in High School. Then I overheard her on the phone talking about her older brother Michael, who was autistic. When she hung up, I said, “Cathy, this is starting to get weird. I also have an older brother who is autistic. And his name is also Michael.” We’ve been good friends ever since and the job led to one of my most popular, and most emotional, podcast episodes: Digital Tools for Autism Spectrum Disorder

This one’s easy. I’ve only done a couple of ‘celebrity’ interviews. One was with technologist James Plouffe, whose name should be familiar to fans of the hit show Mr. Robot. In addition to having a character on the show named after him, he’s also the show’s technical consultant. We had a great talk about Enterprise Security, and he let some inside insights on Mr. Robot slip out as well. I wrapped up the episode, ended the Zoom, and was surprised to see the audio of the recording wasn’t processing as it usually did — because I FORGOT TO HIT THE RECORD BUTTON!!! James was kind enough to redo the episode — and it turned out fine — but it definitely lacked the freshness and spontaneity of the original session. The lesson: always hit Record as soon as you start the Zoom!

I’ve been podcasting monthly since February of 2016. We have aired 55 shows so far.

Have fun. People want to hear people having fun, no matter how technical or esoteric the subject. Don’t be afraid to make jokes. Invent a unique way to present your material. Make it new! 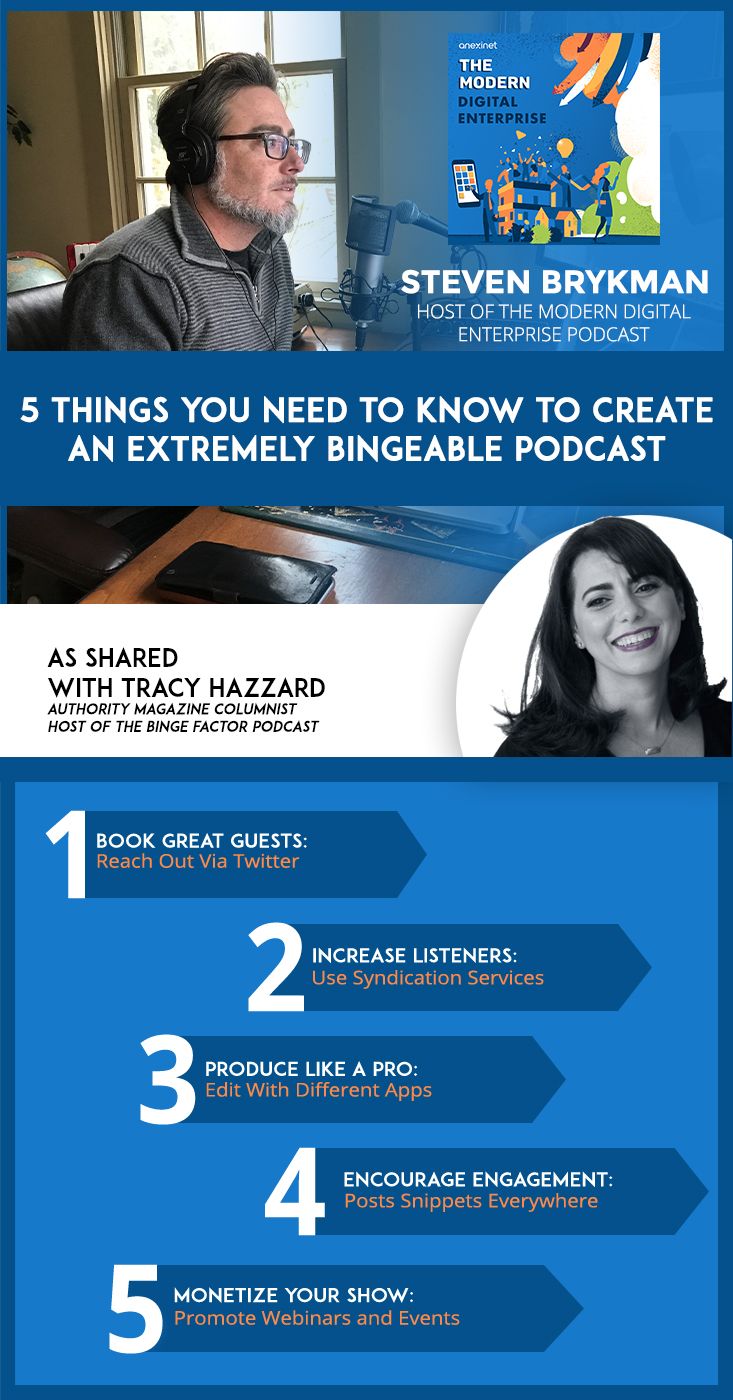 1 ) Book Great Guests. Book anyone you find interesting. I don’t book people based on their title alone. If I meet someone at a party (back when we still went to parties) and it turns out they’ve done something interesting, I’ll put them on the show.

Anexinet’s the Modern Digital Enterprise (formerly Device Squad) was originally meant to be more of a promotional tool to let potential clients get to know us as people, rather than a sales tool to highlight our products and services. So, my strategy was to focus on subjects that would appeal to the most listeners versus focusing on more esoteric aspects of technology (though they may have been more relevant to the company.

Lastly, I’ve had good luck just reaching out to people through Twitter. That’s how I landed the James Plouffe interview.

2) Increase Listeners. Use a real syndication service like Libsyn or Bluebrry and get your podcast in as many places as possible (iTunes, Google Play Music, I Heart Radio, Spotify, YouTube, SoundCloud. Etc.). Post each episode on social media a bunch of times (I read somewhere the magic number of times you need to repost to show results is at least ten).

Some less obvious ideas: post episodes to Reddit, find Medium articles on similar topics and post a link to your podcast in the comments. Lastly, interviewing clients about the work Anexinet did, and how it helped them, has been a great strategy because in addition to helping foster the relationship with that client, clients are always eager to help promote the episode.

3) Produce in a Professional Way. Keep production simple but be obsessive about making the recordings super-clean so that they seem as professional as possible. I do all my recording in Zoom and all my editing in Garageband. Also, I use Audacity whenever I need to do any correction. Also, I use The Levelator, another free app, to even out the levels if they’re all over the place.

Lastly, I use this amazing AI-driven application called Descript, which saves me a ton of time by automatically removing the “umms.” Also, Descript will generate a transcript from the audio that automatically identifies the speakers! It’s phenomenal.

4) Encourage Engagement. Have a transcript of episodes to insert excerpt snippets of text in the listing for the episode, on social media, and elsewhere. I recently found this great, free service called Headliner (www.headliner.app) that lets you convert audio snippets of your podcast into little videos you can then post everywhere or embed into newsletters, emails, websites, etc.

Reach out to hosts of podcasts on similar topics and try to get booked as a guest on their podcast. I also take my Zoom recorder to tech conferences and walk around interviewing people. It’s a great way to find new guests and score some content about cutting-edge tech subjects — all while spreading the word about your podcast.

5) Monetize Your Show. Since The Modern Digital Enterprise is owned by Anexinet and is a promotional tool for the company, our model is a little different. I haven’t had to worry about monetizing the podcast. We did produce a short ad for the company that we include in every episode, and we use the episodes to promote our upcoming webinars and events, but that’s about it.

Cheap Podcast Launching That is Still Really Good With Sarah St. John of the Frugalpreneur Podcast

Building In Podcast Money Making Opportunities You Can Taste Like On the Road With Mr. CA Wine, Chuck Cramer