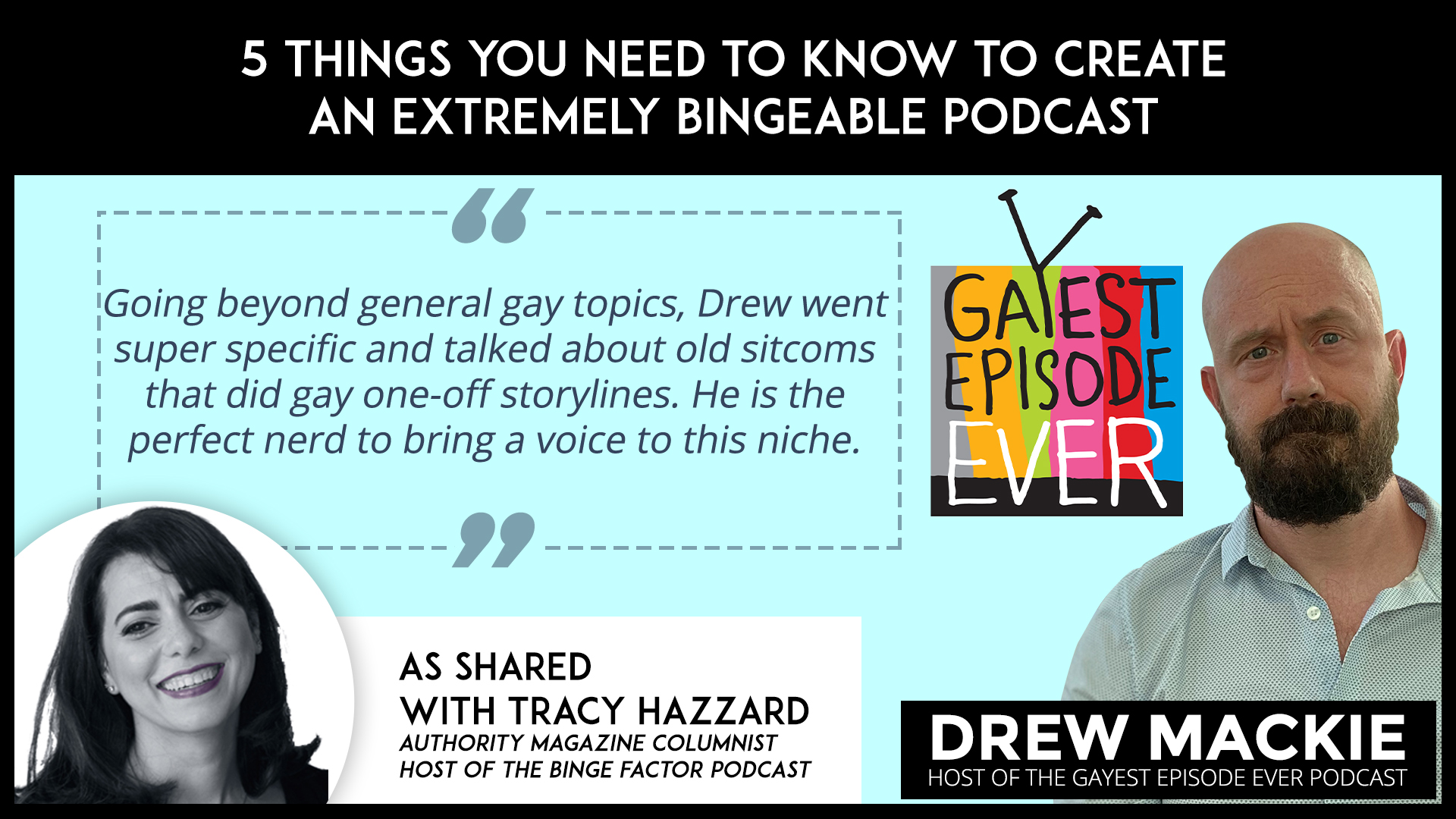 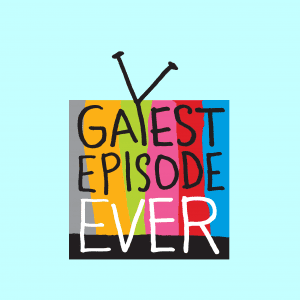 As part of my series of interviews about “5 things you need to know to create a bingeable podcast”, I had the pleasure of interviewing Drew Mackie.

In the span of a year, Drew Mackie ended a career as a writer and pivoted into podcasting, and he’s very happy to be in this industry. Along with Glen Lakin, he co-hosts Gayest Episode Ever, a podcast about the LGBT-focused episodes of classic sitcoms, as well as Singing Mountain, a podcast about video game music. He’s also the COO of TableCakes Productions, an L.A.-based podcast network, where he produces Monday Afternoon Movie, Underbelly L.A., Happy History, and more.

My first job was at my hometown newspaper. I worked for print outlets for about ten years before moving to Los Angeles and writing for an entertainment news website. And while I’m happy to have done everything from locally-focused stories for alt weeklies to interviewing Carol Burnett for People magazine, nothing I wrote ever quite gave me the satisfaction I was looking for.

During a slow summer, my friend and I started a podcast as a bit of an experiment with the medium. I quickly realized that by controlling every aspect of the audio, you could make a little world for your listeners to inhabit for a little bit. I really got into all the little details that go into crafting and polishing an episode. In late 2018, Smart Mouth host Katherine Spiers and I decided to launch a podcast network, TableCakes Productions, with the idea being that we could consolidate our resources but also that we could take our know-how and help other people craft their own shows.

I was in a Lyft and the driver and I were making small talk, and he asked me if I voiced cartoons. I said no, and he said he recognized my voice from somewhere. Then, I admitted that I’d done some podcasting. When I told him one of my shows was Gayest Episode Ever, he very excitedly said that he’d just started listening to it that week. So not only did he want to know about podcasting in general, but he also told me about his coming out. It ended up being a more personal connection than I usually have. It wouldn’t have happened had I not done the podcast. 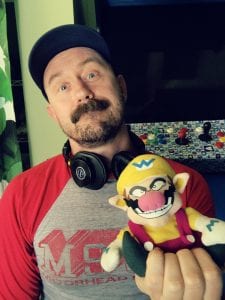 Well, I almost feel bad saying this, but the first podcast I ever did was with someone I’d known for a while but didn’t know well. It turned out we had different professional goals and different ways of getting to them. We also had different takes on what a well-produced podcast episode should sound like. After about a year, it was clear that this professional relationship wasn’t a good match. I had to tell him that I felt we should go our separate ways. It was worse than a break-up, in some ways. But as bad as I felt about doing that, realizing that we weren’t on the same page professionally meant we had to both move on. It also made me realize that Katherine and I were on the same page, and that’s why she’s still my business partner.

What are the main takeaways, lessons, or messages that you want your listeners to walk away with after listening to your show?

On Gayest Episode Ever, we try to explain how sitcoms are actually important artifacts, socially speaking. They say a lot about what was going on at the time they were written, how much society has changed since an episode initially aired, and how writers and actors can use art to entertain but also inform public opinion about controversial topics. And that’s the goal we hope to achieve every episode. But in a broader sense, we made a successful podcast about something that’s rather niche — old sitcoms that did gay one-off storylines.

We both wondered if anyone would care what we had to say, because neither of us is famous, but we found an audience nonetheless. I hope someone listening to Gayest Episode Ever — or for that matter, my other podcast, Singing Mountain, which is even more niche because it’s about video game music — would realize that if they care enough about a subject, they could probably make their own show that’s super-specific and laser-focused on that one subject area. If they put in the effort, they will find listeners who care about that subject just as much. They are out there. 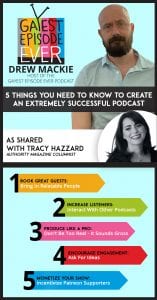 Drew Mackie of the Gayest Episode Ever Podcast shares the best way to:

1) Book Great Guests. It’s great to bring in people who can speak to the experience of someone who is another gender, race, nationality, sexuality, body type, age, religion, etc. Because whatever that person is, there is probably a member of your audience who is also that and will be stoked to hear from someone like them.

2) Increase Listeners. Seek out interactions with podcasts that have similar audiences to yours.

One of my shows once booked a very popular, very well known comedian with a massive podcast following. We got only the slightest bump in followers from her because most of her Twitter/Insta followers like her as a celebrity but aren’t big podcast fans and even fewer wanted to hear her talk about a specific film. When we booked someone who was not famous but had a moderate podcast following, the bump was bigger — especially if that podcast was kinda sorta in the ballpark of our show.

3) Produce in a Professional Way. Be less gross. To sound more professional, turn away from the mike when you take a drink of water. Sometimes, I’ll hear a gross swallowing noise on a podcast, and I’ll be like “that would have been easy to remove.” Don’t think you have to sound like robots. Breathing and stuff makes you sound human, but the moistest, stickiest mouth noises can be edited out.

4) Encourage Engagement. Ask your audience what they’d like you to cover in an upcoming episode. Everyone always has ideas.

5) Monetize. Give an incentive for people to pledge money on Patreon. A lot of shows don’t really offer much aside from a thank you on air — if that. We said that when we got to $500 a month, we’d do a limited bonus podcast only for Patreon subscribers. It was a very clear reward. It gave people the sense that were working together to unlock that bonus podcast.