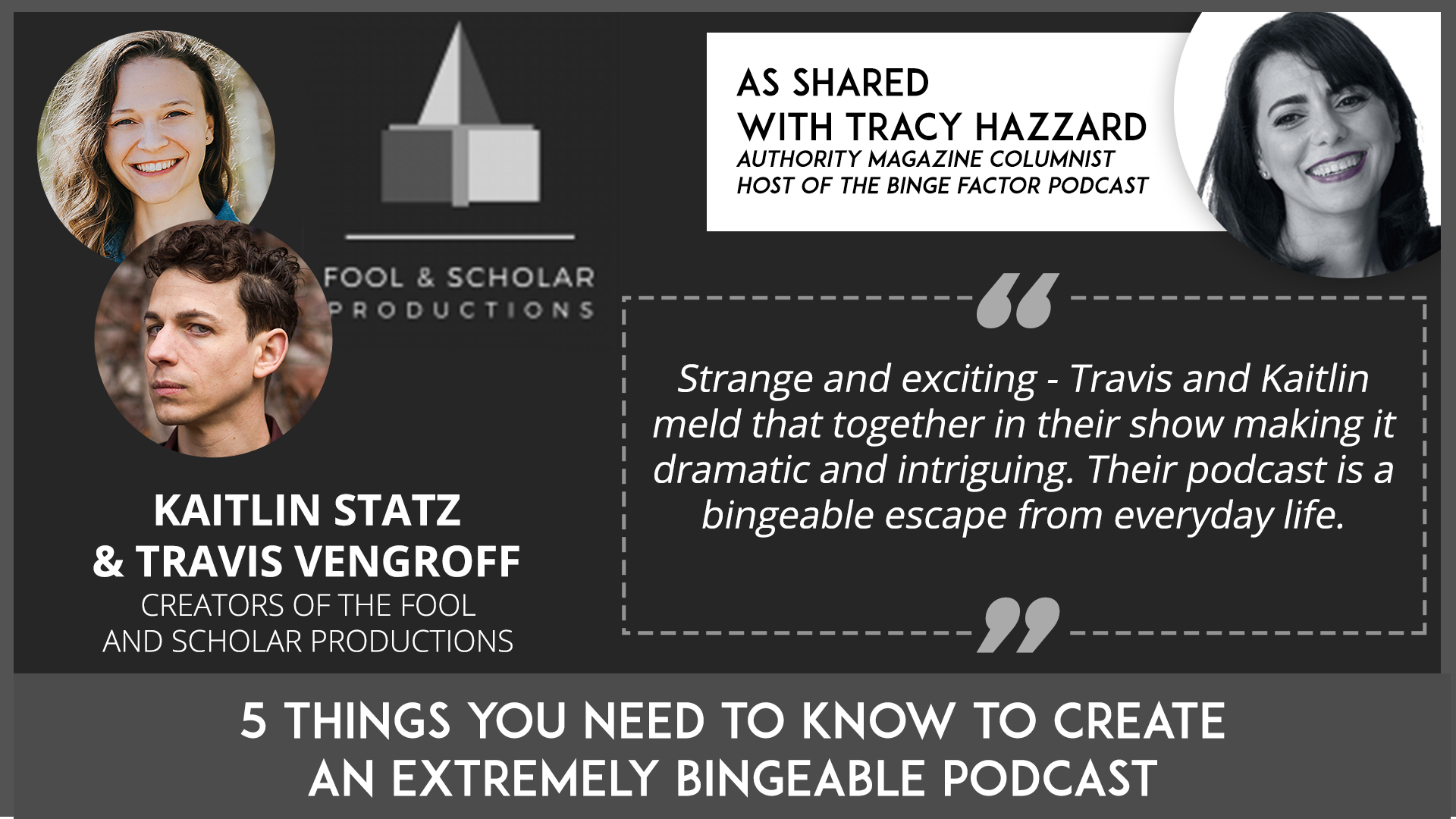 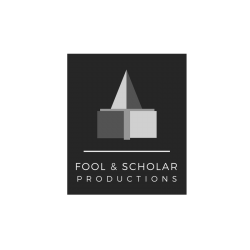 As part of my series of interviews about “5 things you need to know to create a bingeable podcast”, I had the pleasure of interviewing Kaitlin Statz and Travis Vengroff.

Kaitlin Statz is the award-winning writer and creator for podcasting duo Fool & Scholar Productions, creators of The White Vault, VAST Horizon, Liberty, and Dark Dice podcasts. Statz and her partner, Travis Vengroff work as full-time podcasters via supporter-driven sights such as Patreon. Their productions have won numerous awards, most recently a Webby Honoree for 2019 and fourteen Audio Verse Awards for 2020. They release over an hour and a half of scripted, edited, and fully designed content each month as a two-person production team.

Travis Vengroff is the award-winning producer, editor, & sound designer of The White Vault, VAST Horizon, Liberty, and Dark Dice podcasts. Vengroff and his partner, Kaitlin Statz work full-time for their fans, who support these shows via Patreon. Their productions have won numerous awards, most recently a Webby Honoree for 2019 and 14 Audio Verse Awards for 2020. They release over an hour and a half of scripted, edited, and fully designed content each month as a two-person production team.

Kaitlin: My background is in archaeology and anthropology. I honestly thought that was going to be my career going forward for much of my young life. While I was working toward my master’s, I was searching for a creative outlet and found it in writing. I began writing audio scripts while still studying and ducking between libraries; soon found out that I had a knack for it. There was no gap between my eventual graduation and the start of my work as a podcaster. I took the love of research and cultural exploration into my stories and never looked back.

Travis: It’s a bit of a story but my background was in music. I played accordion in a rock band, and my career path took form when we recorded our first album. I’d never edited or recorded audio before and it was quite the experience. Then, the band broke up, and being the founding member who arranged the songs, I decided to finish making the album on my own. It was a learning experience, effectively a mentorship in editing, creativity, and working with extremely limited resources to create the project. I was lucky to work with a talented audio engineer, and by the end of the summer, he’d just unlock the door and let me edit on his computer all day.

A few years and ten albums later, a friend and I decided to make an audio drama podcast. It was a lot of fun and we were surprised by its success in not only gaining listeners but also how polished the final product could be. We didn’t even have to travel or perform a live show to create a following. It was eye-opening. We released a new episode every two weeks, and eventually, the donations we got through our Patreon got close enough to our income, so we became full-time creators. 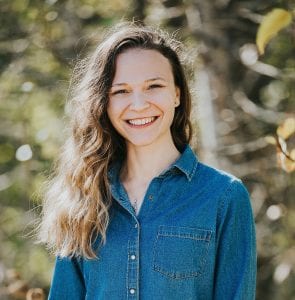 Kaitlin: The whole experience is a bit of a wild ride. I had never imagined when I started that my stories would reach so many thousands of people. Having an audience is an awe-inspiring concept; knowing you bring them joy, fear, or even just a distraction from day to day life. When fans send in fan art of characters they’ve only ever heard in audio I get to see how they envision them in their mind’s eye. Or the first few times we received physical fan mail. Each time it’s surreal, knowing we entertained someone enough to have an impact on their actions.

Travis: We started an improvised fantasy horror podcast called Dark Dice a year and a half ago, entirely by accident. We intended to record a bonus episode for our main audio drama The White Vault, where the cast of our show play D&D, but the story wound up being really creepy and amazing, and the character interactions were not only delightfully theatrical, they actually introduced two of our cast members from different countries who have since become best friends and bought a house together. If that weren’t enough, I had an idea to put together a really bold fantasy soundtrack for the show, and surprising and consistent good luck helped bring it together. I was able to enlist Enzo Puzzovio, one of the world’s top medieval instrumental performers (who owns and plays more than 250 different historical instruments), a number of co-composers like Ryan McQuinn and Steven Melin, and I wrote & translated lyrics that were sung by a real 40-person choir. True to form, I remote directed them as they sang in a mix of Icelandic and the fictional D&D language Infernal, which my 12-year-old self would have never believed possible. I could never have predicted any of this, and our shows’ continued journeys fulfill my creativity. I love being challenged or trying new things out.

Kaitlin: Not funny, but a huge oversight on my part when I was starting out. Marketing makes a world of difference. I knew early on that podcasting meant writing stories, casting actors, designing the soundscape, production, and more… but I had not taken marketing into account. My early attempts at advertising my shows were disjointed, low quality, and lacking in brand cohesion. Looking back, I’m surprised anyone even gave us a chance! 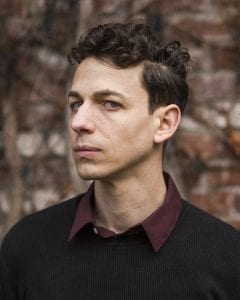 Travis: I made the mistake of not listening to more audio dramas and not becoming a bigger part of my niche community sooner. The more you listen to diverse stories, the more you can learn. Had I heard more shows I would have been inspired sooner to take bigger risks, try different techniques, and work with more people than just my friends.

Travis: My partner and I have been creating audio drama podcasts for five years and we’ve aired over 100 core episodes. If you count bonus stories and interviews that number is over 150 episodes.

What are the main takeaways, lessons or messages that you want your listeners to walk away with after listening to your show?

Kaitlin: What I hope to do is entertain and distract. People listen to my shows to escape the normal in exchange for something exciting and, in most of my story’s cases, terrifying. I hope I can give them that brief distraction, and maybe haunt their thoughts into the dark of night.

Travis: The White Vault is a horror fiction podcast that will introduce listeners to places and peoples they very likely did not know about. It also showcases many languages, cultures, and scientific processes accurately, which we feel is very important. 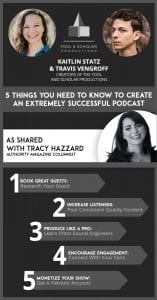 Kaitlin Statz and Travis Vengroff of the Fool and Scholar Productions share the best ways to:

1) Book Great Guests. Asking is the first step. Having clear communication on expectations, time commitment, and actually having a knowledge of that guest’s work will go a long way toward confirming them and having meaningful conversations. In the rare instances where we do interviews, I spend about a few additional hours researching my guests.

2) Increase Listeners. Consistently posting quality content is the best way to grow your fanbase. That being said, be sure to promote your show in the places where your fans gather in the real world or digital world.

3) Produce in a Professional Way. Learn how to use your selected DAW before you begin production on a planned episode. Play around with the software and become comfortable with everything you think you will need to know. Then, learn more. Watch YouTube videos or Twitch streams by sound designers and engineers to help learn the tricks needed to really let your work shine.

4) Encourage Engagement. Be authentic. People want to connect with creators and hosts. If they listen to your show, they spend a lot of time with you or your characters whispering into their ear, so they want to know you better. But engagement is a two-way street. Don’t expect them to come driving down the road if it looks closed down.

5) Monetize. Monetization is fairly complex, and there is no one best way to monetize for every show. Personally, Patreon has been our best and most successful way to monetize, but we also offer copious amounts of premium content, and we were able to gradually build up content (and a fanbase) as podcasting became a larger part of our lives.

“How to Create a Bingeable Podcast through a Unique Format” with Dr. Christian Gonzalez of the Heal Thy Self Podcast